Handling large, heavy steel beams can be a labor-intensive process.  A manual operation such as that would require a number of strong workers to carry it out successfully and to keep the production throughput consistent.  A firm came to Midwest Engineered Systems faced with that very problem.  They were seeking to robotically automate the loading and unloading of steel beams from an existing paint line.  During the unloading process, the beams must be palletized and the layers separated with 44 in. long wooden sticks to protect the newly painted parts.  Ultimately, the system has to handle steel beams ranging from 4 to 12 feet in length and weigh up to 80 lbs. each. 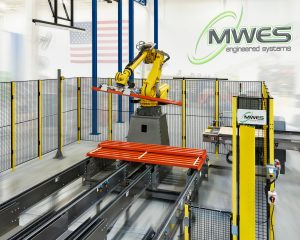 MWES designed and built that firm six robot machine tending cells that are fully automated and require minimal human intervention and labor to operate. Three of the robot cells would be dedicated to loading the unpainted steel beams onto the hanging carriage hooks. While the other three robot cells would unload and palletize the painted beams onto an outfeed conveyor. Each automation cell is equipped with a Fanuc R-2000iB/185L robot with a vacuum/magnetic gripper EOAT. Specifically for the three unload cells, an outfeed Titan Chain Conveyor System made up of three sections to handle the loading, buffering and unloading of the stacks of beams is used. Lastly, a wood sticks feeder system is utilized to provide the robot with the sticks necessary to separate the layers of the stacks.

After the completion of the powder coating process, the painted parts carrier transfers into the unload robot cell.  When the carrier is in its final position, it will signal the robot that the painted steel beams are ready to be unloaded.  The robot’s EOAT picks each beam off of the carrier one at a time and places the beams on the outfeed conveyor.  This cycle will repeat a number of times until a complete layer is formed.  With each completed layer, the robot will pick and place three 44 in. long wood sticks on top of the layer of beams to protect them during transport.  Once the full stack is complete, the outfeed conveyor indexes to either the buffer zone or the operator unload zone.  At the unload zone, the operator manually bands the stack of beams together and then transfers the stack to the wrapper system.

The robotic paint line tending automation cell that MWES provided this customer gave them a load/unload rate of 15 seconds per steel beam for each station.  The robotic tending automation gave this customer consistent results and a solid throughput that would be unmatched when compared to manual labor.  Workers are simply responsible for loading the wood sticks into the feeder system, banding the completed stacks together and removing the stacks from the cell.

Midwest Engineered Systems has a wide range of experience in building robot machine tending automation. If you’re looking to improve your machine tending throughput, we have the knowledge and experience to make the project a success.

Contact us to learn how Midwest Engineered Systems can automate even your most complex and challenging operations today!