With quality manual labor getting increasingly hard to come by and product demand increasing, the customer was looking to move its case and tray palletizing operations to an automated process. This process needed to be done at higher and higher rates of speed all while keeping the products separated by style. This is in addition to making sure the right product is placed on the appropriate destination’s pallet. 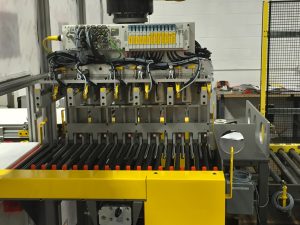 Midwest Engineered Systems proposed a robotic palletizing system that could handle the three styles of trays and two styles of cases, as well as handle four different styles of pallets, quickly and efficiently. The automation system was designed around a routing system to handle four infeed conveyors, two for each robot cell and two palletizing outfeed conveyors. The robotic palletizing operation makes use of two Fanuc M410iC robot arms that could grip and move the cases or trays.
In operation, the packaged products would come down an infeed conveyor to be bump turned into rows. Once a row is ready, the robot will position itself underneath and pick up the row of cases/trays and place it on the correct pallet. The robot could also place a slip sheet if required between the pallet layers at predetermined intervals.

The system infeed was designed to sort the cases and trays as they arrive at the staging area with the intent of not mixing the product on the pallet so that each pallet contains one type of product. One issue that was tackled is one tray-style was shaped in such a way that it had to be handled differently than other cases and trays. In this case, the differing tray-style was separated from the others and placed on a separate line in order to be more efficiently palletized. 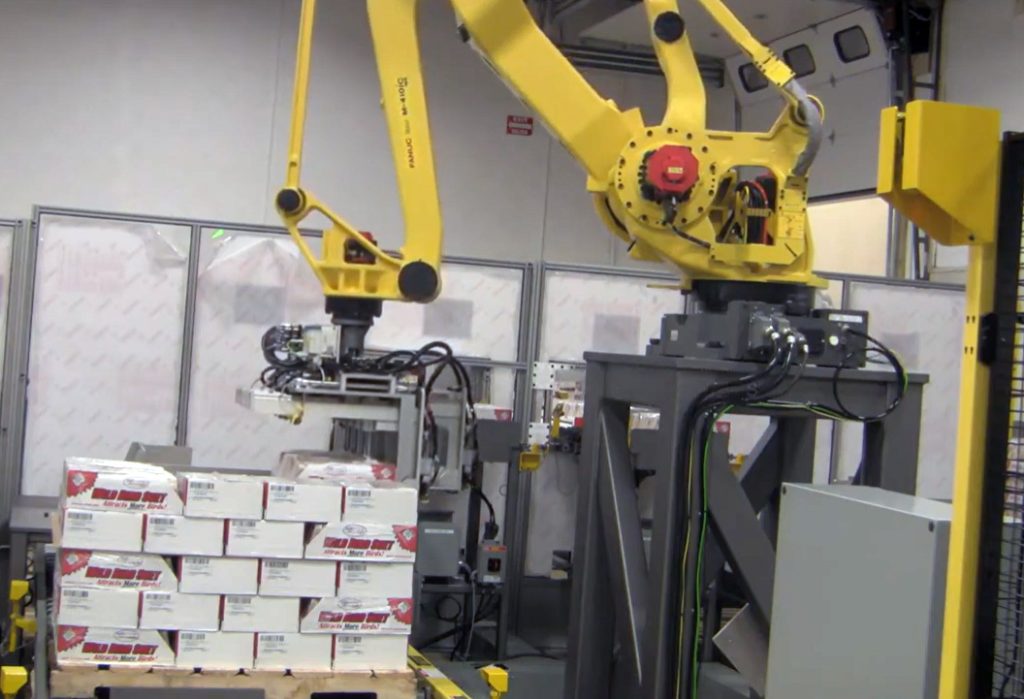 Once the pallet has been stacked to specifications, it is moved down the outgoing conveyor where an operator in a forklift manually removes the pallet of product from the end of the conveyor. New empty pallets are then manually placed on the conveyor ready for the next load.

Replacing a manual palletizing operation that was much slower and more prone to mistakes, the MWES robotic case palletizing system benefited the customer by increasing the palletizing throughput necessary to keep up with demand. Utilizing this robotic system afforded the customer the ability to palletize multiple pallets of product simultaneously with a cycle time of 5 picks a minute per robot from the infeed conveyors. Each of these picks could consist of up to 5 cases or trays at a time. This performance provided the customer with far greater speed and efficiency over what manual processes could provide.

If you’re looking to improve your throughput of the cut case or tray palletizing, a robotic palletizer could be the solution. Midwest Engineered Systems offers palletizing systems that can handle cases, trays or both in combination and in any number of sizes. Contact us to learn about how Midwest Engineered Systems can automate even your most complex and challenging operations today!