With their current system down to only 60% effectiveness, the customer’s automated engine block wash stage was quickly becoming a hindrance rather than a help – not the best situation when the block wash is one of the larger bottlenecks in the engine building process. Heap on the increasing amounts of downtime due to the age of the machinery, and the need for an updated solution became obvious.

The customer turned to Midwest Engineered Systems to explore a refit of their existing system. By analyzing and understanding the customer’s current production process, MWES engineered a robotic automation system that took advantage of new and innovative technologies that address many of the production issues. MWES’s solution would also fit into the same footprint as the previous system. 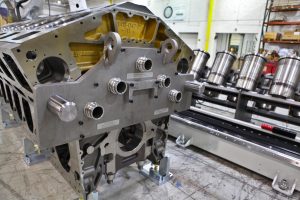 The new washing process begins with the installation of custom endplate holding fixtures onto the engine block. These fixtures were internally designed and built by MWES specifically for each variant of the engine the washing system operates on. The endplate fixtures become the clamping interface to the block positioner and are built for a lifetime of articulating the 2 to 10-ton blocks in the automated positioning system.

After the endplates are installed, the engine block is loaded via crane onto the head and tailstock assemblies of the positioning system. The MWES developed an automated clamping system that locks the block onto the positioning system. Flood hoses are then attached to the internal passages of the block. Once the crane is removed and all wash bay doors are confirmed by the sensor as closed, the automation system’s ABB IRC5 Controller begins the cleaning process.

The wash program is comprised of a number of preprogrammed steps that are bespoke to each variant of the engine block and can be updated with new versions as the customer requires. The first of the wash steps is a highly articulated robotic wash of all cavities and holes. Next comes an internal oil passage flush and sluice pump via the attached flood hoses. The robot changes tooling from an automated tool changer before moving on to drying the block via a compressed air wand. The changer has an automated hood to protect from the wash system environment. Once dry, the robot again changes tools to apply a corrosion-preventative coating as its final stage before allowing the doors to be opened and the engine block removed.

The MWES solution also featured a number of process improvements and features that helped the new robotic automation system see an increase in speed over the previous system. The fixtures that secure the block to the head and tailstock pivot assembly are now automated, making it easier for operators to load and unload the blocks. New fixtures were also redesigned for the connection and disconnection of hoses for internal block passage cleaning. This hose quick connects reduced the time required from the more manual activities previously employed. 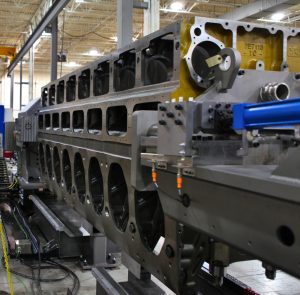 Using the prior programming as a basis, MWES rebuilt the robotic automation system’s software to be more flexible during its operations. That flexibility comes in two forms. The new system is more easily upgradeable for new operations on different parts or refinement of current processes. The software also features the flexibility to restart from any point in the automated process should a stoppage happen. The later feature can lead to considerable time savings over previous industrial robotic programming that forced the automation system to completely restart the process in work stoppage situations – doubly important when the wash sequence is one of the larger production bottlenecks.

In terms of hardware improvements, the entire robotic integration aspect of the system was re-thought in MWES’s process development phase. Taking into account the solvents used to clean the products, MWES employed a slightly different approach from the previous system in applying robotics. Moving the cleaning robot from a floor mount to an overhead system using an invert-mounted arm on a robot transfer unit increased wash bay cleanliness as well as maintenance. Using a foundry grade ABB industrial robotic arm that features purged gearboxes and positive pressure internals also helps keep the robotic automation system running smoothly without taking on contaminates from its surroundings.

With these innovative solutions, MWES was able to increase the robotic wash system’s cycle time by 30% while reducing maintenance and cleaning costs. Long term, the new MWES developed robotic automation system will yield further benefits as the future-proofed new control system will make it easier to upgrade and modify the system as the product needs change.

Midwest Engineered Systems has a wide range of experience in building robotic automation. If you’re looking to improve your manufacturing throughput, we have the knowledge and experience to make the project a success.