Staffing lengthy and labor-intensive production lines can be a daunting task.  With the challenge of finding enough qualified labor in today’s market, this firm chose to move to robotic automation for their casting finishing production line needs.  Utilizing robotic automation frees this firm from the burden of having enough workers to keep the throughput moving forward on an assembly line this is labor-intensive. 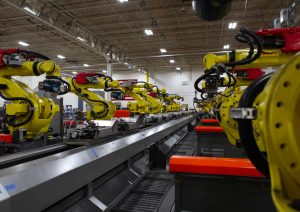 MWES designed and built a system that would allow a single operator to control the entire finishing production line.  The finishing line would utilize seven robotic finishing stations, each with one of the various tools responsible for a specific part of the production line.  At the end of the line, a robot will place the castings on a conveyor where operators will inspect and touch up the castings.  Once that is complete, the castings are then loaded onto skids that are then retrieved by a forklift for transfer to the next part of the operation.  Skid de-stackers are also used to conveniently present single skids to the operators from a stack.  Also, scrap conveyors are mounted on each side of the pallet conveyor to collect material that is removed during the finishing process.  These two conveyors will take the material to a third conveyor that will dump the scrap into a bin. 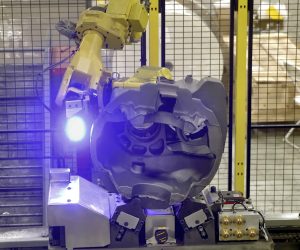 The system receives the part via a casting infeed conveyor, where the part is then reoriented by the operator to a specified, consistent orientation to allow for the infeed scanner to locate the part.  The part will travel under a scanner that will identify the part orientation to allow for the robot to pick the part off the conveyor and place it into the system.  The information from the infeed scanner will be sent to the robot that will then remove the part from the conveyor and place it on a fixture that is mounted on one of the pallet conveyor pallets.  A buffer conveyor is used when necessary to assist when a line change is needed during a part change over or a gap occurs in the delivery of the parts.  The part is loaded into station #1 which has the first available empty fixture which has been recirculated through the system and transferred back to station #1.  A robot with vision will be used to find the orientation of the part on the fixture, and that information is passed to each station for the robot path offset. 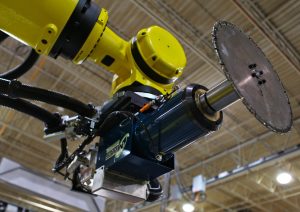 Once the part has left the camera station, it passes through the next three stations.  Each of those three stations has two robots and is tooled with cutoff and grinding wheels.  Using those tools, the robots remove the areas of large flash from the part.  Once complete, the part then proceeds to the next two stations.  At these two stations, the part is received by two smaller robots which are tooled with smaller detailing tools.  Using a chisel and pencil grinders the robots work concurrently to remove the remaining areas of smaller flash. 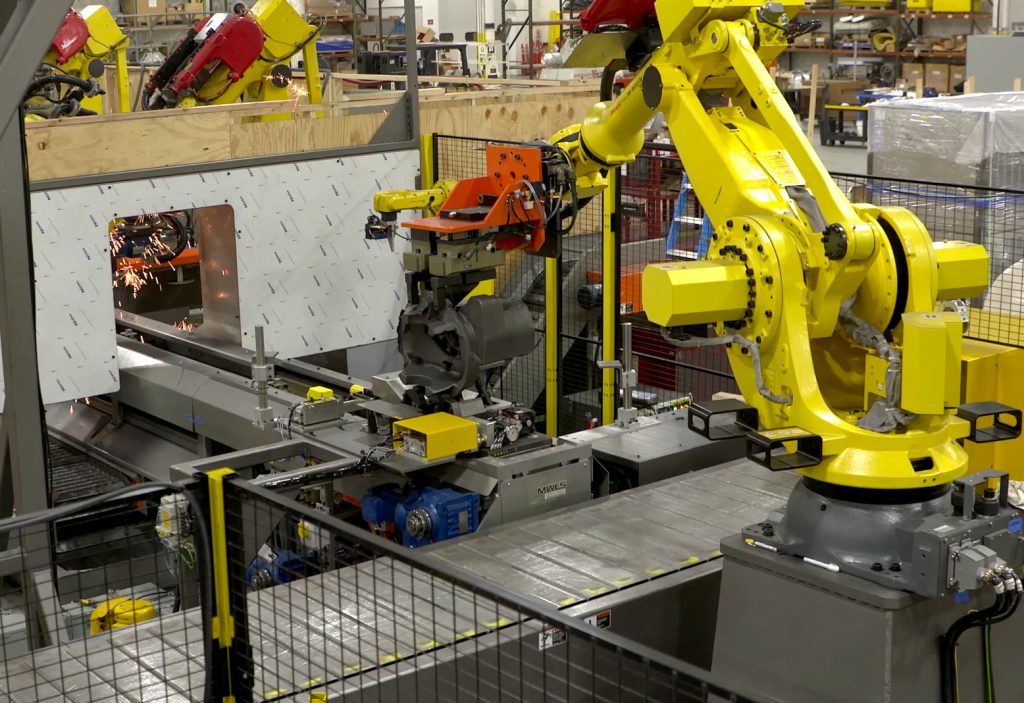 At the final station, a robot picks up the part and places it on an outfeed conveyor.  The operators will be able to do touch up and inspections on the part while on this conveyor.  Once this is completed, the operators will use a gantry crane to load the part onto a skid located on the conveyor.  At the exit conveyor, a forklift is then used to remove the skid.  The part process will automatically be returned back to the start of the production line and a new skid is dispensed from the empty skid destacker onto the conveyor line.

The automated production line MWES built for this customer allowed them to automate a production line that would normally require a great deal of labor and time to complete.  This system afforded the customer greatly improved throughout by having an average cycle time of 30 seconds per part and requiring only a minimal amount of labor to operate.

Midwest Engineered Systems has a wide range of experience in building robotically automated production line systems. If you’re looking to improve your production line throughput, we have the knowledge and experience to make the project a success.